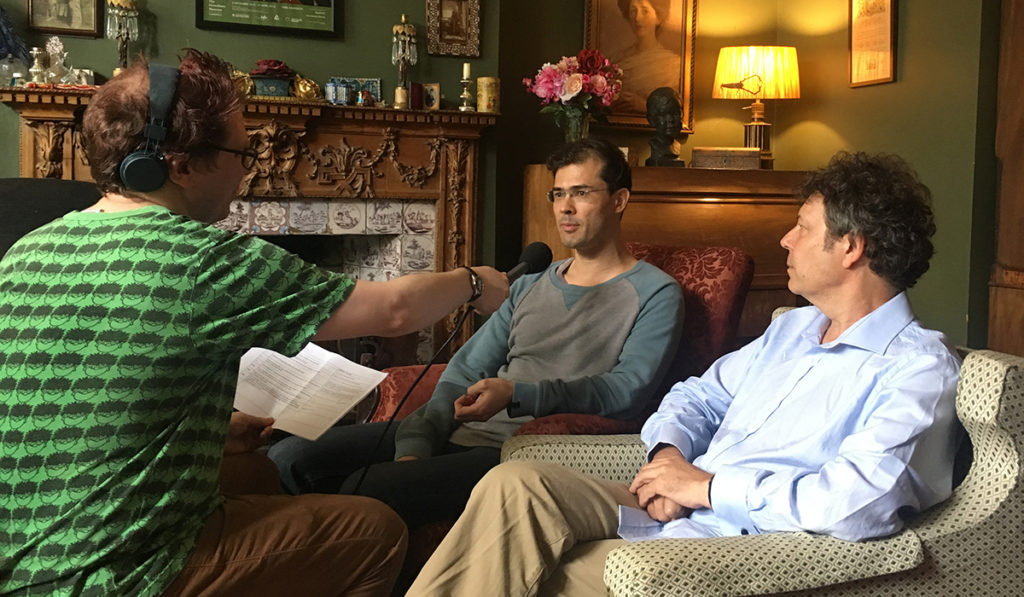 Since 2015, friends of the Academy of St Martin in the Fields – including many of the world’s greatest classical musicians – have been interviewed for our Podcast which explores the work and music at the heart of the orchestra.

Hear all ASMF podcasts on SoundCloud or iTunes.

All podcasts produced by Ben Eshmade

ON PAGANINI, BRAHMS AND THE END OF THE WORLD AS WE KNOW IT
March 2021
In the final episode of the Academy’s podcast in its current form, producer Ben Eshmade talks to Joshua Bell from his home in New York during lockdown and we go back to a rehearsal in London in early 2020, before the world shutdown and orchestral concerts and touring came to an abrupt halt due to COVID-19. Joshua Bell discusses performing and directing the Paganini 1st Violin Concerto and directing the Academy in Brahms Symphony 4.

The Academy Podcast · Episode 15: On Paganini, Brahms and the end of the world as we know it

GAVIN BRYARS ON JESUS’ BLOOD NEVER FAILED ME YET

In the latest episode of the Academy podcast, we look back at our remarkable, through-the-night performance of Gavin Bryars’ iconic work ‘Jesus Blood Never Failed Me Yet – a piece centred upon an unknown homeless man’s vocal refrain.

Over the last twenty years, the Academy has worked creatively with hundreds of people who are or who have been homeless. This particular project was a collaboration with Streetwise Opera, who formed the choir for the performance; and Gavin Bryars’ ensemble and Southbank Sinfonia, who played alongside members of the Academy of St Martin in the Fields, West London Mission and The Connection at St Martin’s.

The Harpsichord with Mahan Esfahani and John Constable

In this episode of the Academy podcast, we eavesdrop on a conversation between harpsichord heroes Mahan Esfahani and John Constable.
Mahan, who was inspired to take up the instrument as a child, in part, after seeing the Academy perform live, has made it his life’s mission to rehabilitate the harpsichord in the mainstream of concert instruments. He has a busy and varied solo career and can regularly be heard on BBC Radio 3, most recently presenting a 3-part series, ‘The Alternative Bach’.
John Constable is Principal pianist and harpsichord for the Academy, a post he has held since 1984. He was principal pianist of the London Sinfonietta from when it was founded in 1968 up until 2017.

In conversation with Jeremy Denk

In a fascinating episode of the ASMF podcast series, Ben Eshmade meets Jeremy Denk, one of America’s foremost pianists, who offers an insight into his life as a busy concert pianist, delves into the repertoire of Mozart, and reflects on the art of music-making. The winner of a MacArthur “Genius” Fellowship also talks about his love of writing and about studying at Indiana University – a link he shares with Academy Music Director Joshua Bell, who also appears in this podcast episode.

In this very special edition of the Academy of St Martin in the Fields Podcast, we eavesdrop on a conversation between Lady Marriner and Sir David Attenborough speaking about the history, performances and recordings of the Academy and our founder Sir Neville Marriner.

Find out more and view video clips from the recording at www.asmf.org/ladymarrinersirdavidattenborough

Hear from two of the world’s most in-demand musicians in this podcast about the new Overture for Violin and Orchestra, which has been specially written for the Academy of St Martin in the Fields and Music Director Joshua Bell by composer and double bassist Edgar Meyer.

Ben Eshmade talks to members of the Academy Chamber Ensemble in the group’s 50th anniversary year. Get a behind-the-scenes insight to life with this world-renowned ensemble, as musicians Tomo Keller, Stephen Stirling, Stephen Orton and Lynda Houghton discuss the group’s rehearsal techniques, favourite repertoire and most memorable on-tour moments.

Hear all ASMF podcasts on SoundCloud or iTunes.