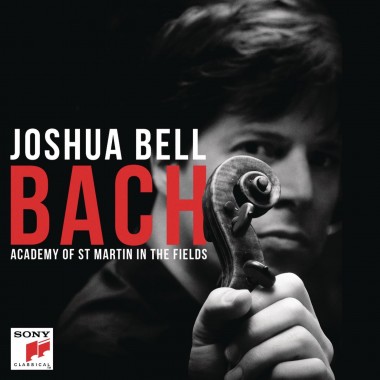 Bach is the second album released by Grammy Award-winning violinist Joshua Bell and the Academy of St Martin in the Fields, since Bell became the Academy’s Music Director in 2011. Bell performs Bach’s sublime Violin Concertos No. 1 and 2, along with a never-done-before ‘violin and orchestra’ arrangement of the famous Chaconne from the Partita No. 2 (adapted from Mendelssohn’s piano accompaniment), the Gavotte en Rondeau from Partita No. 3 for solo violin (using Schumann’s accompaniment), and the universally beloved ‘Air on the G string’. The album was placed at #2 in Classic FM’s Albums of the Year 2014.

“It’s been worth the wait: backed by his Academy of St Martin in the Fields chamber orchestra, [Bell] offers outstanding versions of the two violin concertos”
***** The Independent

Go behind the scenes on the making of Bach with Joshua Bell.

Bell’s well-known love for the music of Bach dates back to his first appearance in front of an orchestra at age seven, yet this album also earns the distinction of being Bell’s first-ever Bach concertos recording. About the album, Bell said: “In the Academy of St Martin in the Fields, with many of its members having had vast experience playing with original instrument bands, I have found the perfect partner – an orchestra that, in my opinion, wonderfully balances an ‘authentic style’ with some of the beauties of ‘modern tradition’. It is because of my work with the Academy that I finally felt compelled to being to record the music of Johann Sebastian Bach.”

“…crisp and exciting readings of the Violin Concertos Nos 1 and 2, with Bell and the players in perfect accord.”
**** The Observer