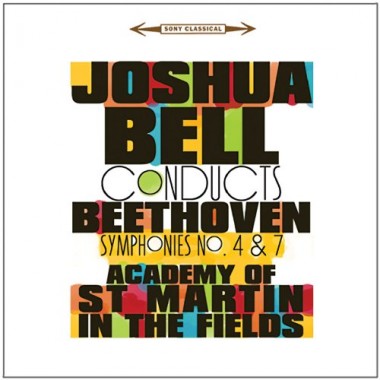 Director: Joshua Bell
They made me listen to Beethoven with fresh ears… This recording is a real pleasure.
BBC Music Magazine
Buy on Amazon

Beethoven Symphonies No. 4 & 7 is the highly celebrated first album recorded by Joshua Bell and the Academy of St Martin in the Fields after Bell became only the second person to hold the post of Music Director after the Academy’s founder, Sir Neville Marriner. The first recording in a projected complete Beethoven symphony cycle, the album debuted at #1 on the Billboard Classical Albums Chart, receiving glowing reviews.

“With their very first recording together, the Academy of St Martin in the Fields and its new music director Joshua Bell instantly establish themselves as leaders in their field and one of the top teams in the music business. It’s as blunt as that. No matter how well you think you know these two Beethoven symphonies, stand by for a fresh and exhilarating learning experience… Stunning and essential.”
Herald Scotland

About the album, Bell said: “The beauty of these pieces is that there are so many ways of doing them. My background is a mix of various elements: the Romantic violin tradition that came from my teacher and the influence of the early music movement from working with Roger Norrington and Steven Isserlis. It’s a unique take on all those things… With the Beethoven, I’m always trying to push this music to another level because it’s incredibly visceral and exciting.”

Watch the Academy performing the second and fourth movements of Beethoven’s Symphony No.7 in concert