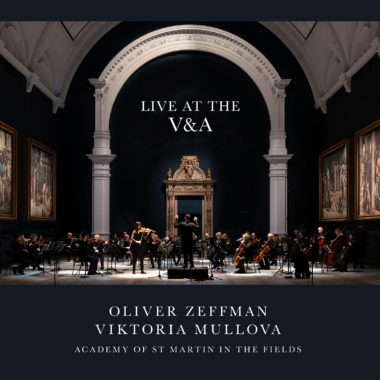 Live at the V&A

Atmospherically filmed amid the Raphael Cartoons in the V&A’s Raphael Court, this album is a treat for both ear and eye. British conductor Oliver Zeffman leads the Academy of St Martin in the Fields in a program that wanders through time, perfectly complementing the glorious surroundings. Russian-born British violinist Viktoria Mullova joins the ASMF for Mozart’s Violin Concerto No. 3 in G Major in a performance that’s crisp, songful, and wonderfully eloquent, and her Bach solos speak powerfully in such a striking setting. Zeffman conducts Honegger’s Pastorale d’été with a lovely sense of atmosphere, while Arvo Pärt’s timeless Fratres – performed by Tomo Keller, Martin Burgess, Robert Smissen and Richard Lester – makes a huge impact with its stillness and deceptive simplicity.