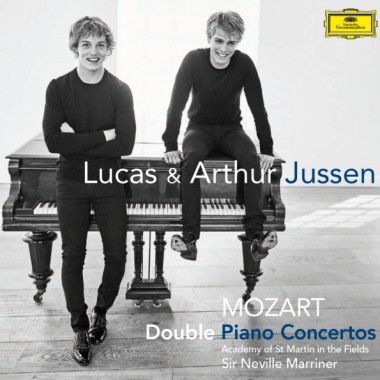 Conductor: Sir Neville Marriner, Soloists: Arthur and Lucas Jussen
moments where the two pianos toss a motif between each other sound for all the world like a single instrument.
Gramophone
Buy on Amazon

Ever since they performed for the Dutch queen in 2005 at the ages of just 12 and 8 years old and becoming the first Dutch artists to sign with the historic Yellow Label Deutsche Grammophon, the Jussen brothers are regarded as something of Dutch national treasures

On working with the brothers, Sir Neville Marriner said:

“You realise that this is not usual, this is not just two good pianists playing together: they sense each other’s most small, individual little bit of interpretation… These boys are so refreshing, musically and personally, of course. They are so likable and so open to any sort of musical suggestions you make… it’s a pleasure”

Go behind the scenes of the recording sessions with the brothers and Sir Neville in the following video: