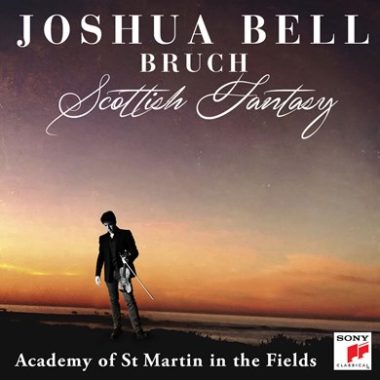 Joshua Bell, director and soloist
This album – take it from me – is incredible.
Aled Jones, Classic FM
Buy on Amazon

It features Bell’s first recording of the virtuosic Scottish Fantasy as well as a new recording of the Violin Concerto No. 1 in G minor, which he first recorded over thirty years ago with the Academy and our founder Sir Neville Marriner. Now, as Music Director of the Academy, Bell both performs and directs the orchestra, and offers a fresh take on these two wonderful works. It was recorded in September 2017 at Air Studios in London.

In recent years, the Scottish Fantasy has become a favorite performance piece of Bell’s. His affection for the piece runs deep, with good reason: “My father’s family were from Scotland, and I grew up hearing stories about how my great-grandfather and great-great-grandfather fought in the Black Watch in Scotland.  My dad was proud of his Scottish heritage, and this connection makes the melodies in Bruch’s Scottish Fantasy even more meaningful to me.”

The Fantasy bristles with the snap and lilt of Scottish folk songs, and Bell goes on to say, “It is one of the most beautiful and touching pieces I know, and so brilliantly orchestrated. It is a unique ‘concerto,’ not following the traditional three-movement form. Each of its four movements tells a story.”

Bell recalls how Bruch’s ever-popular Violin Concerto No. 1 was the first major concerto he learned as an 11-year-old. “This piece is connected to so many memories!”  Bell mentions that the great nineteenth-century violinist, Joseph Joachim, who figured prominently in Bell’s recent Sony Classical release, For the Love of Brahms, placed Bruch’s concerto in the same league as those of Beethoven, Brahms, and Mendelssohn, and called it “the most seductive of violin concertos.” Bell says, “It is a huge audience favorite because it is so rich and lush. It has excitement, power, passion, and intimacy – it’s got everything!”

“Now after more than thirty years of performing this concerto and with a variety of conductors, I am still inspired by the work, and I continue to find myself exploring fresh ideas and new possibilities for expression. As Music Director of the Academy of St Martin in the Fields, I now have the opportunity to conduct while playing the solo part and it actually brings a whole new dimension to this piece. The Academy has become my musical family over the past decade, and I feel we have special chemistry!”

Get your copy of the album now on Amazon or iTunes.