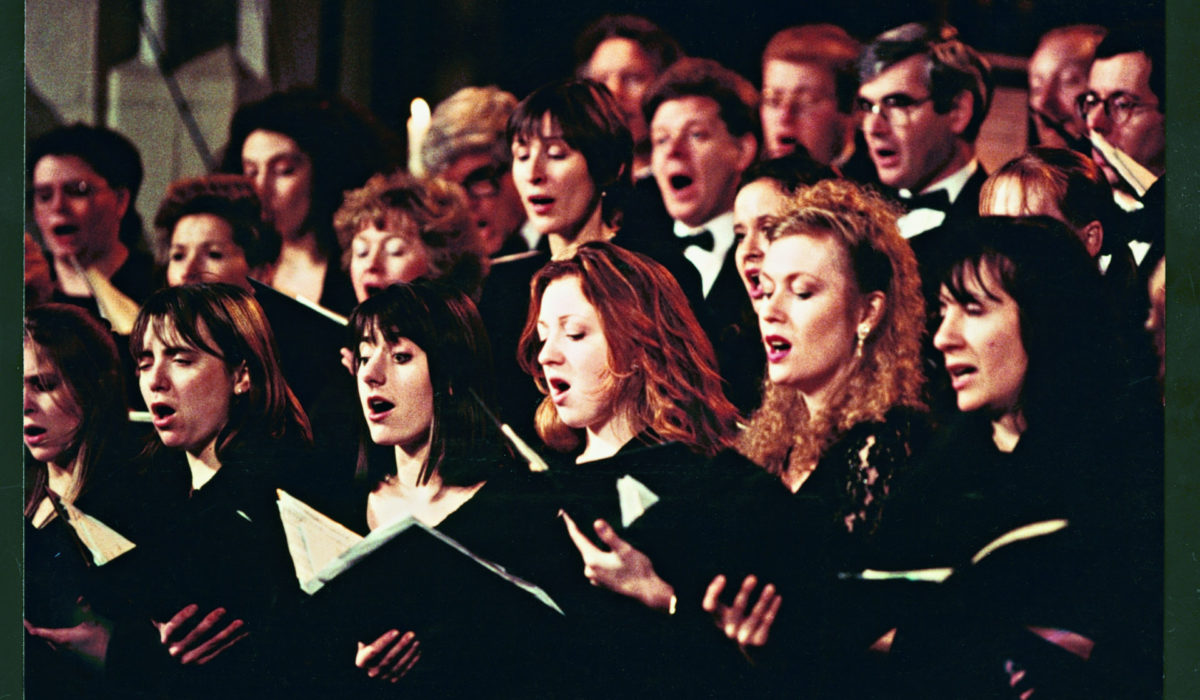 The Chorus of the Academy of St Martin in the Fields was formed in 1974 with Laszlo Heltay as director in a partnership with Sir Neville Marriner lasting over 25 years. Performing all the major choral works in a variety of styles touring across Europe and USA, the chorus made 28 recordings with legendary soloists including Kiri Te Kanawa, Janet Baker, Anthony Rolfe Johnson and Dietrich Fischer-Dieskau, culminating in sharing a Golden Disc with the orchestra for the sound track of Amadeus.

When Laszlo Heltay arrived in UK in 1956, a 26 year old refugee from the Hungarian Revolution, all he possessed were his grandfather’s overcoat, a letter of recommendation from composer Zoltan Kodaly and a box of batons.  Speaking no English, this graduate of the Franz Liszt Academy in Budapest and pupil of Kodaly, began life in the UK by cleaning offices in Oxford Street – in contrast to his role at Budapest Radio.  However, his linguistic and intellectual abilities soon got him to Merton College Oxford to pursue his music studies. There he founded the Kodaly Choir in 1957 and in 1960 the Collegium Musicum Oxoniense (later renamed the Schola Cantorum of Oxford).

Heltay was a charismatic and driven director, and his influence on the performance of choral music all over the world is difficult to over-estimate.  The clarity and agility which he demanded of his many choirs reached its apogee with the Chorus of St Martin in the Fields which he founded in 1974 when Sir Neville Marriner sought a group whose singing style would match the style of the orchestra, now well established.  Purity of style, devoid of explosive consonants with a clear tone and fresh spirit, was only just beginning in the choral world.  Laszlo was the pathfinder in this movement, setting the new standard from the start at Oxford and inspired generations of conductors, choral leaders and singers who revered his musicianship, charisma and relentless perfectionism.

Laszlo’s choral and Marriner’s instrumental styles matched perfectly, and their 25 year partnership took them through concerts, tours and 28 recordings of the major choral repertoire with legendary singers of the day. These included the soundtrack to the film Amadeus (1984), the 250th anniversary performances of Handel’s Messiah in Dublin in 1992 and closing concerts of the Hong Kong handover in 1997. Other recordings included Paco Pena’s Missa Flamenca and the Champions League football theme, still used today!

Always keen to encourage young musicians, especially conductors and singers, Laszlo was a staunch supporter of the Europa Cantat movement and regularly toured European countries and further afield as Chorus Master, Guest Conductor, Masterclass leader or Jury member.  He had an impressive command of languages and added German, Spanish and Catalan to his English and native Hungarian. Outside music, his other passions were books, football, tennis, chess and especially his dogs who would respond to his commands in whichever language was uppermost in his mind. In Spain and Hungary he worked hard to set up rescue centres through his own charity for abandoned dogs.

His autobiography was published in 2018 entitled Dogs & Conductors (“From Bach to Bark” did not translate well into Hungarian).  He long ago acquired British citizenship but in his eighties he retired from the world of music and returned to live in Budapest with his beloved dog Charley.  He is buried in the same cemetery as Kodaly, Bela Bartok, Bardos and Georg Solti.

“…an orchestra and choir playing with the consummate perfection and ensemble which only comes from the mutual understanding gained from years of playing on the same team.”

CHORUS OF THE ACADEMY OF ST MARTIN IN THE FIELDS RECORDINGS