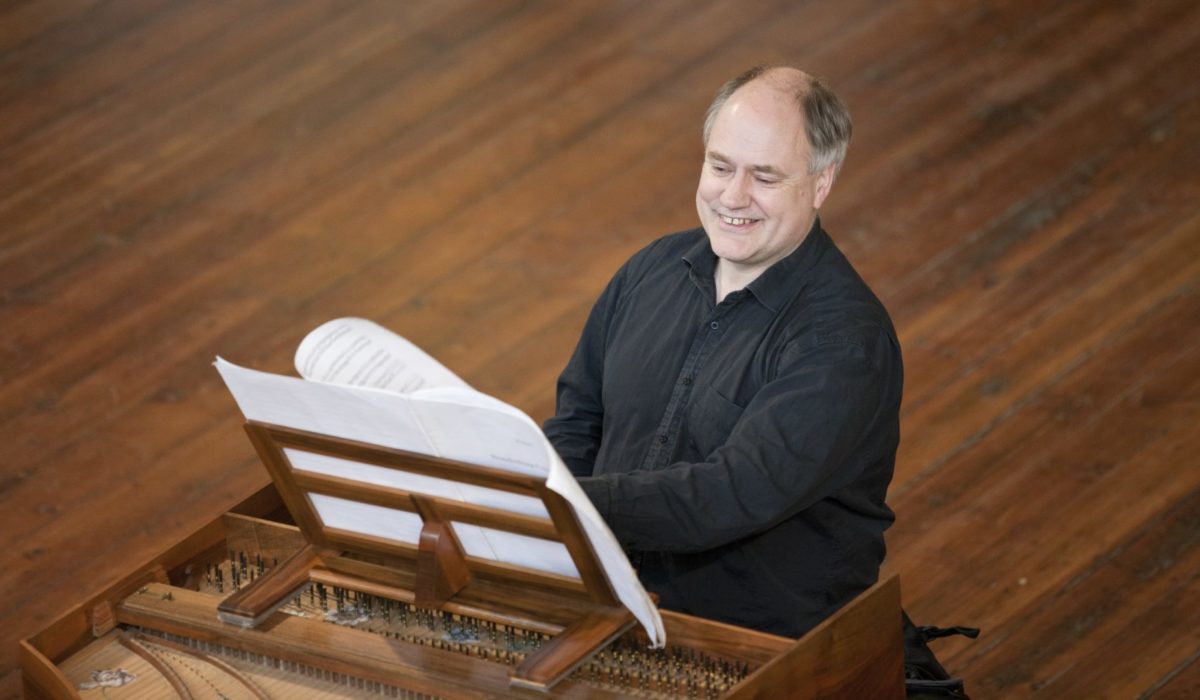 Available to watch online for 30 days from 22 April

We’re joined by renowned conductor, harpsichordist and scholar John Butt for this programme of Baroque and Baroque-inspired music.

This programme explores something of the earliest orchestral music composed and performed in England, and shows how this provides a sonorously rich seam for later composers, right into our own age. The English orchestra found its beginnings in dramatic productions involving music and speech, and, as the seventeenth century proceeded, it was increasingly influenced by the increasingly sumptuous textures of orchestras in France and Italy. Matthew Locke (c.1621-77) was a particularly imaginative figure, absorbing indigenous dance styles but also taking something from the freer dramatic idioms of the continent (as a Catholic convert and organist to the Catholic queen, he seems to have been particularly exposed to continental practices). In his music we can trace something of the quirky style well-recognised in Purcell’s music, including some spicy turns of phrase, and – when necessary – compositional rigour. Perhaps one of the most interesting features of his music for Shadwell’s adaptation of The Tempest (1674) is what is rumoured to be the first notated crescendo in music (‘lowder by degrees’) and also indications of tempo fluctuations. This suggests that baroque music was not always to be played with the ’sewing-machine’ regularity that many still believe it to demand! Purcell’s incidental music for the Fairy Queen (1692) comes very much from the same tradition. The orchestra is clearly more developed, with some lines that would have been demanding even for players at the French court. It is clear that Purcell has fully absorbed French practices, including an exquisite ability to create character and personality in what could easily have been generic dances. But the Restoration English style emerges as an aspect of this internationally-grounded music: a sense of clearly articulated speech, dramatic pacing in the free-style movements, and an irresistible penchant for ground basses.

Although the restored court of Purcell’s time brought with it much of the French taste, Purcell was also fully aware of Italianate developments, particularly in his chamber music. The Italian influence was taken even further by the next generation, strongly influenced by Corelli’s irresistibly sonorous sonatas and concertos. The greatest incomer, from Germany, was G.F. Handel, who, like Purcell brought with him a full awareness of the European scene. His orchestral music is very much in the Corellian tradition, if perhaps more ambitious in its dramatic pacing. The Op. 3 concertos were brought together from various beginnings and published in 1734. Although these are based around the essential string orchestra, the first makes excellent use of woodwinds, which provide an extra dimension to a style that is already very much based on dramatic dialogue. The variety of pairings, together with the tutti-solo contrasts, mean that Handel’s orchestra sounds far more varied than the range of instruments would actually suggest. Another way in which Handel exceeds the Corellian model is in the vocality of the lines, both in terms of the coloratura of the fast movements and the lyricism of line and phrase. Although Baroque forms are ‘officially’ cyclic, repetitive and non-progressive, Handel creates the remarkable impression of an eventful sequence of interactions. Handel’s contribution to English style was essentially to define its melodic and gestural vocabulary for at least a century to come.

While much of this music from the 17th and 18th centuries never fully went out of fashion, Baroque style went through a spectacular revival in the second half of the twentieth century. It has always been clear that Benjamin Britten owed much to the cadence and textures of Purcell’s music, showing a similarly winning combination of sound compositional technique and dramatic imagination. He was also part of a much larger movement towards purifying performance of earlier music from ‘romantic’ accretions, and his arrangement of a Purcell ground (Chacony) is a compelling testament to his respect for his forbear. Nevertheless, his markings and performance style are clearly very much of their time, unfashionable in many respects today, but indispensable in their reflection of the aesthetic of the 1950s-70s, precisely the period in which the Academy of St Martin in the Fields first flourished. Errollyn Wallen’s Concerto Grosso, very much following the Corellian footprint, provides a much newer take on the baroque concerto style, also reflecting something of the string sonorities of intermediate composers such as Elgar and Britten. The first movement reminds us of the perpetual motion of the baroque and also the quasi-symmetrical recurrence of themes. But it is also a dazzling rethinking of the concerto grosso, distorted but utterly new and compelling at the same time. The final movement takes us from aria to that most ubiquitous of baroque textures: the ground bass, heard at its most energetic, and strongly inflected by jazz and other contemporary idioms.

John Butt is Gardiner Professor of Music at the University of Glasgow, musical director of Dunedin Consort and a Principal Artist with the OAE. His career as both musician and scholar gravitates towards music of the 17th-18th centuries, but he is also concerned with the implications of the past in our present culture. Author of five monographs centering around Bach, the baroque and the concepts of historical performance practice, his recent work gravitates towards music and modernity, listening cultures and embodied musical experience, music and film.

Having made 11 early keyboard recordings for Harmonia Mundi, he has made sixteen recordings for Linn Records. Highlights directing Dunedin include the Gramophone award-winning recordings of Handel’s Messiah and Mozart’s Requiem (the latter also nominated for a Grammy award), together with recordings of Bach’s Passions, Mass, Magnificat, Christmas Oratorio and Brandenburg Concertos, Monteverdi’s 1610 Vespers, and Handel’s Acis and Galatea, Esther and Ode to St Cecilia. A recording of Handel’s Samson appeared in 2019, which was an Editor’s Choice and Critic’s Choice in Gramophone (nominated for a Gramophone Award), and disc of the month in BBC Music Magazine. With Dunedin he has made multiple appearances at the BBC Proms and Edinburgh Festival. As guest conductor he has worked with SCO, City of London Sinfonia, BBC Symphony Orchestra, Rotterdam Philharmonic, Stavanger Symphony, Hallé Orchestra, BBC National Orchestra of Wales, The Orchestra of the Eighteenth Century, The English Concert, Portland Baroque Orchestra and Irish Baroque Orchestra.

Since winning the W.H.Scheide prize for his first book, he has received: the Dent Medal of the RMA together with the RAM/Kohn Foundation’s Bach Prize; the award of FBA and FRSE. In 2013 he gained the medal of the RCO, together with an OBE.

You can watch the performance from 7.30pm on Thursday 22 April and it will be available to watch as many times as you like for the following 30 days. Your access details will be sent to you 24 hours before the performance starts, with full details of how to watch the concert.