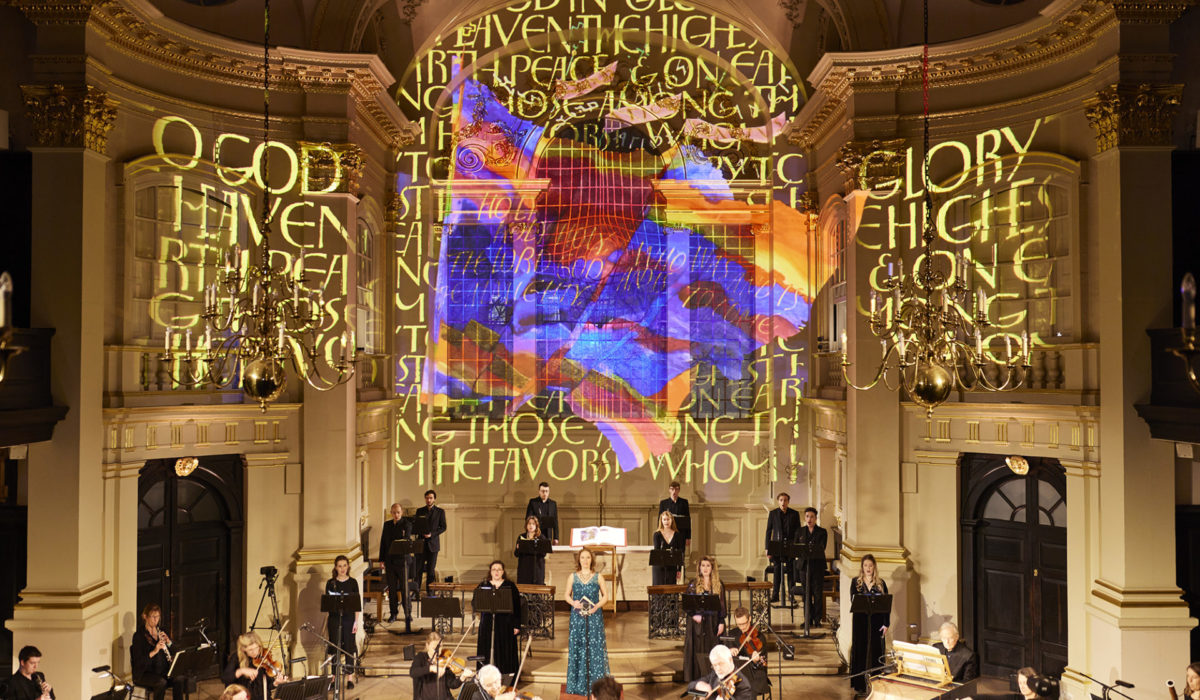 Available to watch online from 8 April – 7 May

This performance brings together well-loved choruses and arias of Handel’s masterpiece with light projections curated by Nina Dunn Studio to create a unique audio-visual experience. Award-winning projection artist Nina Dunn and her team have created visuals based on Donald Jackson’s illustrations from The Saint John’s Bible. These dynamic and vibrant visuals will be projected onto the iconic east window of St Martin-in-the-Fields throughout the performance.

You can watch the performance from 7.30pm on Thursday 8 April and it will be available to watch as many times as you like for the following 30 days. Your access details will be sent to you 24 hours before the performance starts, with full details of how to watch the concert.

Carolyn Sampson has enjoyed notable successes worldwide in repertoire ranging from early baroque to the present day. On the opera stage she has appeared with English National Opera, Glyndebourne Festival Opera, Scottish Opera and Opéra de Paris, amongst others, and she regularly performs at the BBC Proms and with orchestras including the Bach Collegium Japan, Royal Concertgebouw Orchestra, Rotterdam Philharmonic and with numerous orchestras in the USA.

A consummate recitalist, Carolyn Sampson appears regularly at the Wigmore Hall and has given recitals at the Leeds Lieder, Saintes and Aldeburgh Festivals as well as at the Amsterdam Concertgebouw, Barcelona, Freiburg, Oper Frankfurt, Vienna Konzerthaus, and recently her debut recital tour of Japan.

Carolyn has an extensive discography appearing on the Harmonia Mundi, BIS, Hyperion, Virgin Classics, DG Archiv, Linn Records, BIS and Vivat labels. Her recording with Ex Cathedra,’A French Baroque Diva’ won the recital award in the 2015 Gramophone Awards, and her recent disc of Bach Cantatas with Freiburger Barockorchester was awarded a Diapason D’or.

Her debut song recital disc ‘Fleurs’, with Joseph Middleton, was followed by ‘A Verlaine Songbook’, exploring settings of the poetry of Paul Verlaine, as well as ‘Lost is my Quiet’, a duet disc with the countertenor Iestyn Davies, ‘A Soprano’s Schubertiade’, ‘Reason in Madness’ and most recently ‘The Contrast – English Poetry in Song’, all for the BIS label.

Born in Sussex, James Way was awarded 2nd Prize in the 62nd Kathleen Ferrier Awards.  James is a former Britten-Pears Young Artist, a laureate of the Les Arts Florissants ‘Jardin des Voix’, and holds an Independent Opera Voice Fellowship.  He was awarded the Rising Stars prize by the Orchestra of the Age of Enlightenment.

Opera credits include Purcell King Arthur for Staatsoper Berlin; Holy Fool Boris Godunov with the Philharmonia Orchestra; the Ballad Singer Owen Wingrave for Aldeburgh and Edinburgh International Festivals; Davy in Panufnik Silver Birch for Garsington Opera; the Young King in Benjamin Lessons in Love and Violence at St Petersburg’s Mariinsky Theatre, and Sellem in a worldwide tour of The Rake’s Progress conducted by Barbara Hannigan.

Plans for this season and beyond include Stravinsky Pulcinella with the BBC Scottish Symphony and Copenhagen Philharmonic orchestras, Handel Messiah with the Handel and Haydn Society of Boston, and a tour of Handel L’Allegro, il Penseroso ed il Moderato  with Les Arts Florissants.

New Zealand-born Sāmoan baritone Benson Wilson is the winner of the prestigious 64th Kathleen Ferrier Award, the Most Outstanding Overseas Performer of the Royal Overseas League Competition, the Worshipful Company of Musicians Award, and was the 2018 winner of the Joan Sutherland & Richard Bonynge Foundation Award and the People’s Choice Award. He is a Samling and a former National Opera Studio Young Artist.

In 20/21 Benson joins English National Opera as a Harewood Artist, opening the season as Schaunard La bohème for their Drive & Live production. On the concert platform he gives a recital tour of New Zealand including for Auckland Chamber Concert Hall, Hawkes Bay Opera House and Auckland Opera Studio, and later gives UK recitals for Oxford Lieder and King’s Lynn Festivals with pianists Sholto Kynoch and Lucy Colquhoun. Further ahead engagements include house debuts for New Zealand Opera and Queensland Opera, as well as further roles for ENO.