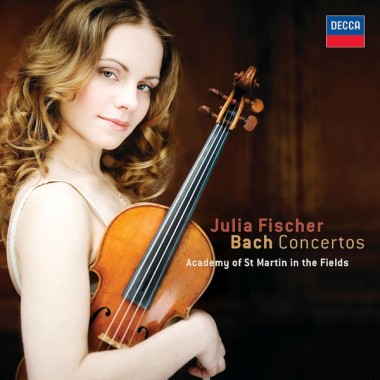 Julia Fischer’s special relationship with J.S. Bach began well before winning the solo Bach (and first overall) prize at the Menuhin Competition at the tender age of eleven, having first played the A minor and Double Concertos at the age of five. However her reward for winning the Bach prize led to a formative experience which she carries with her to this day.

“I received a violin lesson in Bach playing from Yehudi Menuhin himself. He influenced me in a very special way, because of how much he loved Bach and how much the music meant to him.”

On this record, Fischer combines Bach’s two Violin Concertos with his Double Concerto featuring Alexander Sitkovetsky (also on violin) and Concerto for Violin and Oboe with Andrey Rubtsov.

“You can hear very clearly that the concertos are influenced by virtuoso players of that time, Vivaldi, perhaps even Tartini. We think of Bach as very serious – the church music and so on – but for that time they are virtuoso concertos for a violinist to have fun. I emphasise that aspect.”

Hear more from Julia about the music of Bach, the concertos, and working with the Academy below: