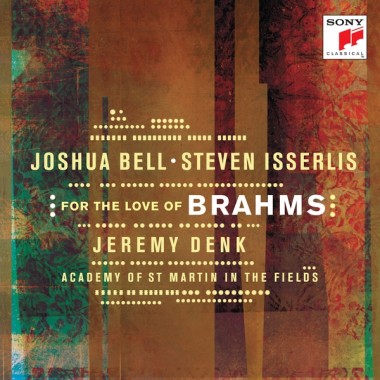 For the Love of Brahms

For the Love of Brahms is the new joint release by Academy Music Director Joshua Bell and cellist Steven Isserlis, made on the back of our January 2016 tour of the UK and Europe.

With works by Brahms and his mentor Schumann, a theme of love and friendship runs through the album, which also features Bell and Isserlis’ own close friend, Jeremy Denk, on piano. Brahms’ final orchestral work – the Double Concerto for violin and cello –  was written as a gesture of reconciliation towards his former friend, the famed violinist Joseph Joachim, and forms the focal point of the album. His first published chamber work, the Piano Trio in B Major, Op. 8 is heard here in its rarely performed original 1854 version. Full of the passion and ardour of Brahms’ youth, it contains subtle hints at his developing feelings for Clara Schumann which were erased in the revised version heard more often today. The album is completed by the slow movement of Schumann’s own Violin Concerto, recorded in an arrangement with codetta by Benjamin Britten for the very first time, which was first performed in 1958 as an Elegy in memory of Britten’s own close friend, legendary British horn player Dennis Brain, who had tragically died in a car crash the previous year.

Before going on tour and recording the work at the beginning of 2016, we spoke to Joshua Bell and Steven Isserlis about the Double Concerto for an episode of the Academy Podcast, which you can enjoy below.

Go further behind the scenes of For the Love of Brahms with Joshua Bell, Steven Isserlis and Jeremy Denk: