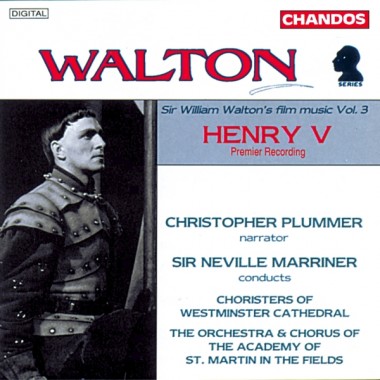 Henry V is the last play of William Shakespeare’s history trilogy which charts the growth and maturation of the young and rebellious Prince Hal into one of England’s greatest monarchs. Featuring some of Shakespeare’s most rousing speeches, the climax of the play is built around the Battle of Agincourt in 1415, when King Henry V led a hugely outnumbered army to victory over the French against all the odds.

At the height of the Second World War, the great Shakespearian actor Laurence Olivier was prompted by the Ministry of Information to fashion the play into a morale-boosting propaganda film, with its release to coincide with the Allied invasion of Normandy. Olivier turned to English composer William Walton for the music, with his characteristic blend of warmth, nobility and splendour providing the perfect support for Olivier’s patriotic reading. It was Sir Neville Marriner and the great Canadian actor Christopher Plummer (best known as Captain von Trapp in The Sound of Music) who first came up with the idea of reworking William Walton’s score into a standalone performance piece, featuring a narrator reciting lines from Shakespeare’s play. In fact, they had begun working together using the more familiar Suite from Henry V arranged by Muir Mathieson (who conducted the recordings with the LSO used in the film) but were frustrated by the amount of missing music; so they set out to put together their own version making use of 90% of the complete music from the score, with the help of arranger Christopher Palmer. This rousing recording, also featuring the Academy Chorus and the Choristers of Westminster Cathedral, is the result.