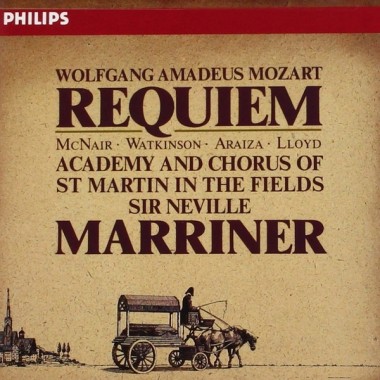 Mozart’s Requiem is one of the most famous choral works in the classical canon and this recording is considered among the best.

It is easy to hear why the Requiem is so loved by classical audiences around the world – whether for the furious energy of the Dies Irae, the devastatingly beautiful Recordare, the terrifying majesty of the Rex Tremendae or the haunting Lacrimosa – and the air of mystery surrounding its composition has only served to heighten audiences’ interest. Whilst the sinister story of rivalry, subterfuge and jealousy between Mozart and Salieri invented by Pushkin and popularised by Sir Peter Shaffer’s Amadeus is complete fiction, the actual circumstances surrounding the work’s origins are no less fascinating.

The Requiem was commissioned by the eccentric Count Franz von Walsegg, an Austrian aristocrat notorious for passing off works he commissioned as his own – and it is very possible he planned to do likewise with Mozart’s Requiem. However Mozart was suddenly taken ill and died, with many movements of the Requiem remaining incomplete. Mozart’s wife Constanze, fearing she would not receive final payment for the unfinished work, passed the manuscript on to fellow composer Joseph von Eybler, hoping it could be completed in secret. Yet Eybler returned the manuscript to Constanze having only made a few minor additions, and so instead she turned to Mozart’s former student Franz Xaver Süssmayr. Süssmayr completed the composition, possibly aided by notes, sketches and instructions left behind in Mozart’s manuscripts, before the finished Requiem was passed on to Walsegg complete with counterfeit signature. The sense of mystery surrounding the work was subsequently fuelled by talk of shadowy messengers, premonitions and even poison in the decades following Mozart’s death, and the actual extent of Süssmayr’s original contribution to the finished Requiem remains unclear to this day.

Although many other composers have since taken it upon themselves to complete the Requiem, it is the version as completed by Süssmayr that is performed most regularly and heard on this recording. The vocal soloists are two-time Grammy Award-winning American soprano Sylvia McNair, contralto Carolyn Watkinson, tenor Francisco Araiza and bass Robert Lloyd – and in a little piece of pub trivia, this was the final Academy recording to be released on LP, before CD became the go-to media of choice for the recording industry.