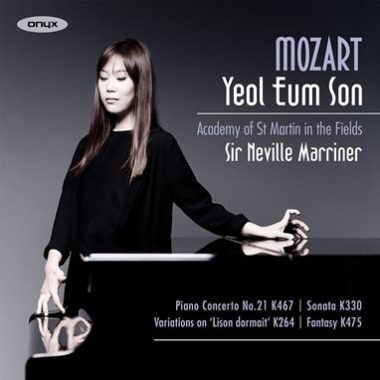 We are delighted to announce the release of South Korean pianist Yeol Eum Son‘s debut concerto album recorded with the Academy of St Martin in the Fields and our founder Sir Neville Marriner. Dedicated to Sir Neville, the disc features the final recording he ever made: Mozart’s Piano Concerto No. 21.

The much anticipated CD also features Mozart’s solo works: the Sonata K. 330, C minor Fantasy K. 475 and Variations on ‘Lison dormait’ K. 264. It was selected by Classic FM as their Album of the Week from 16–20 April.

Apple Music says: “Conductor Neville Marriner’s final album before his death is full of wit and vitality. Under his inspiring leadership, pianist Yeol Eum Son shines in Mozart’s late Piano Concerto No. 21, playing with a forensic attention to detail and revelling in the smallest gestures while the orchestra responds exquisitely to every nuance. The stunning second movement Andante, with its subtle changes in mood, is utterly radiant, while the final Allegro, each note a sparkling jewel, emerges as a slice of musical perfection.”

Listen to Yeol Eum Son talking about the CD and performing live on BBC Radio 3 (from 1:29:40).

Watch footage from the recording of the CD in this video interview with Yeol Eum Son: