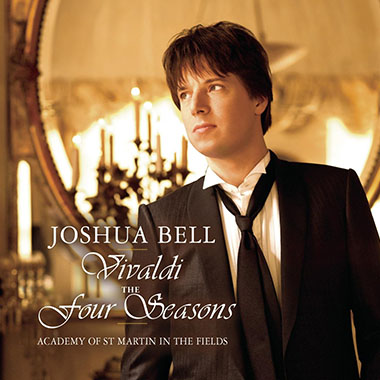 Soloists: Joshua Bell (violin) and John Constable (harpsichord)
If you like your Baroque music with a Romantic gloss, this will be for you.
BBC Music Magazine
Buy on Amazon

The Four Seasons is a work that deserves renown for many reasons. Completed in 1725 it helped launch the concerto form we recognise today. “Of course there are hundreds of performances and it has become one of the most popular pieces of music, ever,” says Joshua Bell ” It has crossed boundaries to people who don’t usually even listen to classical music. But at the same time it is such a personal piece and there is so much room for individual interpretation. Actually, there are no two versions that are alike.”

Joshua Bell is joined on this studio release by Academy harpsichord player John Constable and the orchestra’s celebrated string players, who toured the work with him prior to the recording sessions in 2008. The disc also features another masterpiece of Baroque virtuosity, Giuseppe Tartini’s The Devil’s Trill Sonata.